Since 1979, we have been hand-crafting our award-winning range of ales, IPA’s, lagers, stouts and specialist Scottish beers.

Over our 40 year history, we have won numerous awards, both domestically and internationally. This includes awards from SIBA, CAMRA, UK Supermarkets, Tesco, Meininger and World Beer Awards.
Uniquely, we use a Porteus Malt Mill which dates back to the 1960’s to ensure all our beers are genuinely hand-crafted. For more on our Porteus Malt Mill, click HERE. 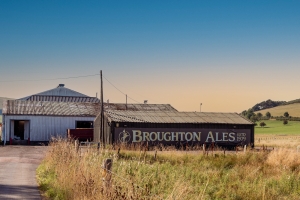 Broughton Brewery was founded in 1979 by David Younger and James Collins in a former sheep station in the wee village of Broughton in the Scottish Borders. It was the first initiated Scottish microbrewery, which appealed to customers looking for a new 'craft beer' experience outside the traditional mass-produced lager and exports. Scots wanted something more, something dynamic, different, and with real flavour.

As demand for Scottish craft beers grew, so did Broughton’s portfolio. Wanting to continue on their microbrewery journey, Broughton shocked the market by introducing the legendary border character ales which included Old Jock & Merlin, to add to their now famous real ales collection. These types of ales blazed a trail for new microbreweries and the Campaign For Real Ale (CAMRA) and soon became stiff competition for the famous Broughton-brewed Greenmantle Ale which you’ll remember drinking in pubs all over Scotland throughout the 1980’s. (if you’re showing your age that is…)

The brewery has gone through several changes of ownership over the years, the latest in 2015 when the current owners took over the business. Since then, Broughton Brewery have developed a range of products and new initiatives that have seen the brewery sales steadily grow and in turn, increase the Broughton Brewery fan base.

In early 2020, the brewery went through a huge product rebrand where they put focus into their best-selling beers and created both the Hopo and Jock ranges which are now going from strength to strength and selling all over the UK.

Look out for your favourite Broughton beers which are stocked in all major supermarkets as well as served in pubs up & down the country. Or you can buy directly from our website for free direct delivery to your door!

As we enter our 5th decade, Broughton are still brewing a unique range of premium beers which you'll find more details of in the 'shop' section of our site. 2020 saw us introduce two new alcohol free beers and a gluten free lager.

The HOPO collection offers a choice of punchy IPA's and craft lagers and also includes a new gluten free lager which comes in 330ml cans. If you're a craft beer fan, you'll love the HOPO range.

The Jock's lead with perhaps our most famous brand - Old Jock Ale. A strong, 6.7% traditional Scotch ale loved by many all over the UK and is available in supermarkets throughout Scotland and some independent grocers south of the border. We've added Wee Jock and Stout Jock to the collection and both beers are going from strength to strength.

All beers are brewed under the careful eye of our Head Brewer, Ian Smith, who has been part of the Broughton family for over 30 years.

Over the last few years we’ve seen our fan base steadily grow and last year launched our first crowdfunding campaign where we sold a 20 year old Russian Imperial Stout. You can ready the story of our stout HERE.

We are also committed to expanding our export markets for customers worldwide. Broughton Ales are actively seeking partners/distributors to help share their deliciously hand-crafted ales around the world. Currently exporting to France, Italy, Germany, Spain, Norway, Denmark & Sweden and preparing to launch in the USA & Canada.

Contact us directly for details of brewery tours and tasting sessions held throughout the year or, if you would like to speak with someone with regard to stocking our beers.

Still haven't found what you're looking for?