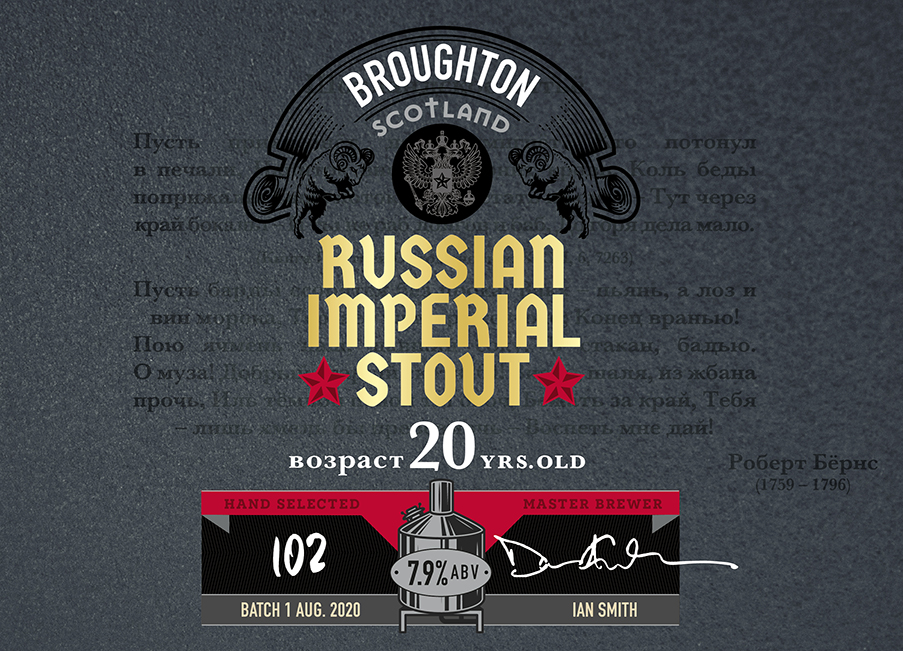 A History of Russian Imperial Stout

In Britain at the beginning of the industrial revolution in the 1690’s, dark ales called ‘Porters’ were popular, especially with the new working classes who were flooding into the great cities (hence the term porter). These porters were easy drinking beers containing highly roasted malt giving a dark brown brew with toffee and roasted flavours.

At this time, Arthur Guinness took these beers to his new brewery in Dublin, increased the dark, coffee flavoured profile of the beer and added ‘Extra Stout’ to the label. Mr Guinness’s Stout was born.

In 1698 Peter the Great, Czar of Russia, fell in love with these Stouts when visiting Britain and requested some be sent to the Russian Imperial court, but embarrassingly the stout had spoiled on its 1,000 mile journey to St Petersburg. Undaunted, Barclays Brewery in London came to the rescue by increasing the alcohol level to a minimum of 7.9% and the amount of hops to create an inky black beer of warmth and character. This new Russian Imperial Stout was an instant hit in St Petersburg and Moscow and inaugurated the start of a substantial export trade in this newly named Russian Imperial Stout.

The later Russian Czarina, Catherine the Great was a massive fan, said to enjoy the stout in copious quantities. In 1796 London Brewer John Courage famously supplied Russian Imperial Stout that it promised would last and mature over many years.

The flow of Russian Imperial Stout continued unabated into the reign of Czar Nicholas II in the early years of the 20th century, even during the First World War in 1914. However, the leader of the Bolshevik party – Lenin – and the whole revolutionary leadership were contemptuous of this ‘bourgeois tipple’. Thus, on the 25th October 1917, when the Bolshevik Revolution erupted in the port city of St Petersburg, Lenin ordered warehouses holding barrels of the last remaining stocks to be destroyed. Witnesses reported a stream of black beer running down the streets.  The October Revolution – and the years of the Soviet Union that followed – marked a sad end to the legendary Russian Imperial Stout.

However, founded in 1979, Broughton Brewery decided to revive this historic brew and at the start of the new millennium in 2000 brewed a batch of Russian Imperial Stout for a new customer in St. Petersburg. Sadly the customer ran out of money and order was never delivered. The casks of Russian Imperial Stout were placed in Broughton’s barrel store, where they have matured for the past 20 years in ideal cool and dark conditions. During the Covid lockdown these barrels were discovered and, when the beer inside was sampled, it still had the strong roasted malt and hop flavours loved by the Czars Peter and Catherine with added complexity and smoothness from the Stout’s long maturation.

We are now offering bottles of this 20 year Old Russian Imperial Stout with 7.9% alcohol, which by its nature is strictly limited, as a reward for pledges in our Save-the-brewery crowdfunder.